Climate change is likely to worsen the situation of the drought-stricken hypersaline Lake Urmia in Iran, even in the most optimistic climate change scenario and without any further human impact.

These dire findings are the result of a new study by researchers from IIASA and Wageningen University in the Netherlands, which examines the potential of a proposed action plan to save the lake under future scenarios of climate change. The study, published last week in the journal Science of the Total Environment, shows that under scenarios of moderate or intense climate change, the current plan will not be sufficient to protect the lake.

“This means that urgent actions are needed to save the lake. It involves both regional action to limit human water use, and global action to limit greenhouse-gas concentration,” says Somayeh Shadkam of Wageningen University, who led the study.

Lake Urmia used to be the second largest hypersaline lake in the world. Located in the northwest of Iran near the Turkish border, the lake is an important, internationally recognized natural area designated by the Convention on Wetlands of International Importance, called the Ramsar Convention, and a UNESCO Biosphere Reserve. It is a home to many species, including a unique species of brine shrimp. The Urmia basin also supports a variety of agricultural production systems and activities as well as livestock.

“Lake Urmia is of central strategic importance in Iran and the region, and this research is an important contribution in the collaboration between IIASA and the country,” says IIASA Director General and CEO Professor Dr. Pavel Kabat, who serves as PhD advisor to Shadkam, and coordinated the project.

Lowest recorded level
The surface area of Lake Urmia has declined by 80% to the lowest recorded level over the last two decades. As a result, the salinity of the lake has sharply increased. This is disturbing the ecosystems, local agriculture and livelihoods, regional health, as well as tourism. The socio-environmental consequences are similar or even larger than those of the Aral Sea disaster. Thousands of people around the lake have already abandoned the area. It has been estimated that people living within 500 square kilometers of the lake are at risk, which could amplify economic, political, and ethnic tensions in this already volatile region.

The lake is drying out because of a combination of factors. Over the past decades, agricultural area has tripled. This resulted in a high irrigation water demand, surface flow diversions and groundwater extraction. Efficient water management stayed behind. During the same period, a significant decrease in precipitation and an increasing trend in average maximum temperature took place.

Lake Urmia (also Orumiyeh or Orumieh) in northwestern Iran is one of the world’s largest landlocked salt lakes, but it is shrinking. These images from the NASA Landsat 5 satellite show the lake in 1998 (left) and 2011 (right) ©NASA Earth Observatory

Restoration plan
A new water management plan to rescue the lake has been proposed, entailing a rapid 40% decline in use of irrigation water. It replaces a former plan which intended to develop reservoirs and irrigation. However, none of these water management plans, which have large socioeconomic impacts, have been assessed under future changes in climate and water availability. In the new study, Shadkam and colleagues explored the impacts of water resources management plans on the inflow into Lake Urmia during the 21st century as part of her PhD research.

First she quantified how much flow would be required to preserve Lake Urmia. Then the researchers developed future projections of total inflow to the lake, using a hydrological model forced with different climate model outputs from the lowest and highest climate change scenarios and different water management plans, as well as the naturalized (without irrigation and reservoirs) situation. The researchers then compared the outcomes to the estimated environmental flow requirements.

Need for action
The results of the new study show that the proposed irrigation plan can help to preserve the lake only if the future climate change will be very limited.

The results also indicate that for the whole range of climate change scenarios, the area will have less water available in the future. “This is an important message not only for the Urmia basin, but also for the wider region. Water scarcity is increasing in this area and we need to adapt,” Shadkam says. 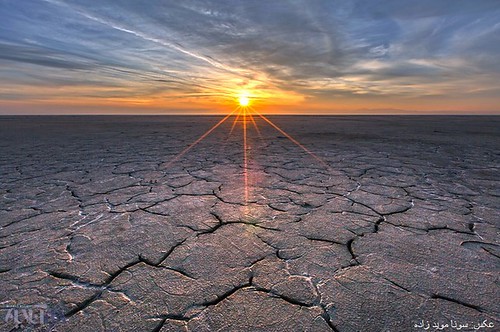 Interactions between IIASA and Iran (PDF)