Joint IIASA and Austrian Academy of Sciences Lecture: Why Evidence Matters by Dame Anne Glover of the Royal Society of Edinburgh

Life is full of decisions and some of the most important of these are taken by governments on our behalf. This lecture will examine how evidence is generated which can inform policymaking and who has responsibility for ensuring that the evidence is credible, trusted and ultimately used.

We believe that policy involves sound scientific evidence in decision-making processes. But what are the criteria by which politics recognizes the relevance of new facts and relationships? Dame Anne Glover answers this question in a lecture at the ÖAW. The Scottish biologist, former scientific advisor to the president of the European Commission and now president of the Royal Society of Edinburgh, knows the perspectives of both science and international politics. At the invitation of the International Institute for Applied System Analysis (IIASA) and the Academy of Sciences she speaks in the hall of the ÖAW on "Why Evidence Matters".

In her lecture, Glover will shed light on the policy-relevant interfaces with science. She will discuss criteria of credibility that policy makers can use for adopting scientific evidence as a basis for decision-making.

The event is being held in honour of IIASA's Director General & CEO, Pavel Kabat. Prior to the keynote lecture, he will receive the Austrian Cross of Honour for Science and Art, awarded by the National Council for especially superior creative and commendable services in the areas of the sciences or the arts.

After six years as Director General of IIASA, the World Meteorological Organization has appointed Pavel Kabat as its first chief scientist and research director. He will lead the overall strategic direction of the WMO science, and its underlying research activities, including the World Climate Research Programme, the World Weather Research Programme and WMO’s Global Atmosphere Watch. He will be celebrated for his leadership over his time at IIASA, when he guided IIASA through a period of exceptional growth. 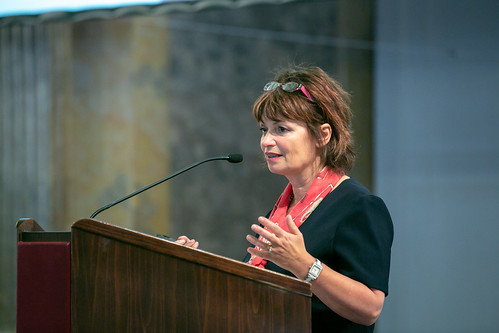 Lesley Anne Glover has a BSc in Biochemistry from Edinburgh and a PhD in Molecular Microbiology from Cambridge, UK. She pursued a research career at Aberdeen University and studies the diversity and function of microbes in soil, the development of sensors to detect environmental pollution and how we respond to stress, which has particular relevance to how we age. Anne Glover was the first Chief Scientific Adviser to the President of the European Commission (2012–2015) and was the first Chief Scientific Adviser for Scotland (2006–2011). Between 2015 and March 2017, she served as Vice Principal for External Affairs and Dean for Europe of the University of Aberdeen. On the 1st of April 2018, she started her tenure as President of the Royal Society of Edinburgh. Furthermore Anne Glover is currently Special Adviser to the Principal/Vice-Chancellor at University of Strathclyde. She has been awarded many honorary degrees and awards both nationally and internationally for her contribution to science.